The Iowa City Area Transit Study (ICATS) was initiated by Iowa City Transit in 2019.  Coralville Transit and University of Iowa CAMBUS joined the study to ensure the study's scope and findings would be comprehensive across all three transit systems.  The transportation planning firm Nelson-Nygaard was selected to conduct a Comprehensive Operations Analysis (a.k.a. Transit Study) for all three transit systems.

There are three transit systems that operate in the local area - Iowa City Transit, Coralville Transit, and the University of Iowa CAMBUS.

While the service areas of these systems overlap on campus and in downtown Iowa City, each meets different needs of the community.

Previous studies have considered the consolidation of all three transit systems.  This consideration was not part of the scope of 2019-2021 Iowa City Area Transit Study with Nelson-Nygaard.

Feedback from the public was collected throughout the study through in-person surveys, online surveys, and open house meetings and presentations.

Scope of the Study

The study was comprehensive in nature and included:

CAMBUS has been fare-free since 1972.

Survey responses were collected across 3 online surveys during fall 2019 and spring 2020.

Open house meetings were held in fall 2019 and spring 2020 to collect feedback from the community.

CAMBUS has implemented the major changes from the transit study as of the FY 21 year.  The transit study also provided a broader scope of opportunities to improve transit through transit infrastructure, including signage, bus stop amenities, and other future planning scenarios.  The transit study documents and recommendations will continue to be referenced for future improvements to the system.

Information below is specific to CAMBUS' participation in the study and changes made as a result of the study.  For more information about Iowa City Transit and Coralville Transit, visit their website.

Learn more about Iowa City Transit's experience with the transit study and changes made to enhance public transportation in the Iowa City area.

Learn more about Coralville Transit's experience with the transit study and changes made to enhance public transportation in Coralville.

All CAMBUS routes were evaluated in the transit study.  Most CAMBUS routes were found to be useful and highly effective as is.  Opportunities were identified to consolidate and simplify service to and from the Hawkeye campus, while also increasing service and frequency on key routes.

Some routes had naming changes.  The name in parentheses is how the route was identified prior to the transit study.

Route schedules and frequency were changed on some routes to simplify service and in some cases, provide more frequent services.

*Although these routes did not have schedule changes as a direct result of the transit study, they did have some schedule adjustments during the FY 21 and FY 22 year due to adjusted transit operations in response to the COVID-19 pandemic.  These changes were carried through as permanent schedule changes beyond the pandemic.

The links below include documents related to ICATS.  Documents beginning with a number a chapter out of the study final report.

02: Introduction
Includes: goals of the study and a description of each chapter

06: Route Profiles
Includes: profiles of each route for each system, including ridership, destinations served, schedule, and efficiency metrics

09: Preferred Alternative
Includes: overall description of preferred alternative selected by each agency, and detailed descriptions of changes by route and system

10: Transit Infrastructure
Includes: analysis of bus stops in the area, including locations and rider amenities, enhancing speed and reliability of transit services through infrastructure, and considerations for moving to zero-emissions vehicles (electric-powered buses)

Kick-off meeting with consultant team from Nelson-Nygaard (NN), Iowa City Transit (ICT) and Coralville Transit (CVT).  Goals of the study were defined and a general timeline of the study was established.

Phase 1 Public Outreach: Ridership data was collected on all routes.  On-board rider surveys were distributed across all routes, and 1,418 responses were gathered on CAMBUS routes (2,777 responses were collected overall across all three systems).  The surveys collected demographic data, information about their transit trip, and desired service enhancements.

Consultant team performed background review and market analysis, developed route profiles/maps, and finalized a report on the existing conditions of transit in the community.

Phase 2 Public Outreach: Public meetings were held in Iowa City, Coralville, and on the UI campus.  Approximately 90 members of the community attended the public meetings and provided feedback about existing transit services.  12 stakeholder meetings were held with area social service, economic development, and educational organizations.  An online tool "Design Your Own Transit System" was put out to gather community feedback on transit priorities.  1,325 responses were completed. 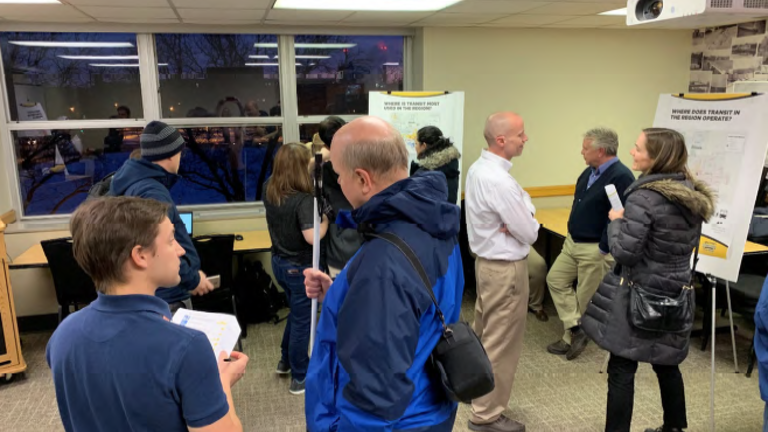 During the phase 2 public outreach, open house meetings were held in Iowa City, Coralville, and on the university campus.

An online survey was distributed for community members to provide feedback on the service scenarios.  About 1,400 responses were received.

CAMBUS began development of a preferred alternative transit system design based upon feedback received and recommendations from the transit study.  The main focus of change was simplifying service to and from the Hawkeye campus and providing more frequent service to the area.

CAMBUS developed routes and schedules for the 2020-2021 academic year.  Route schedules and changes reflected much of the transit study recommendations, but also required additional changes due to the COVID-19 pandemic.  The university held mostly online and some hybrid classes during the academic year, and campus service dedicated to academics was reduced to reflect the decreased demand.  In addition, hospital commuter service was greatly increased to reduce crowding on the buses during the pandemic.

CAMBUS implemented route structure and naming changes as a result of the transit study.  Schedules were modified due to the operational needs of the university during the pandemic.

CAMBUS began planning for the 2021-2022 academic year.  Route schedules were adjusted to reflect regular, non-pandemic, operations of the university. 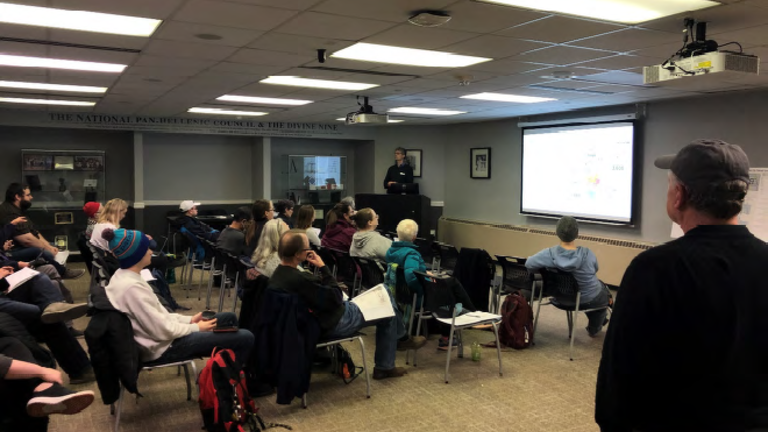 During the phase 3 public outreach, open house meetings were held in Iowa City, Coralville, and on the university campus.  Feedback was collected on the proposed alternative service scenarios developed in late fall 2019.