University of Iowa’s CAMBUS announces Jackie Spradley, student mechanic and driver, was named Support Person of the Year for 2019. Spradley was selected for demonstrating a strong work ethic, positive attitude, and exemplary leadership skills. Supervisors noted Spradley for, “being an overall role model to the organization and going above and beyond to meet the needs of CAMBUS”.

Spradley is the first recipient of this new annual award that is part of a larger effort to recognize and reward the efforts of CAMBUS employees. To be eligible for this award, an employee must have been promoted to a support role and have excellent attendance and work records. 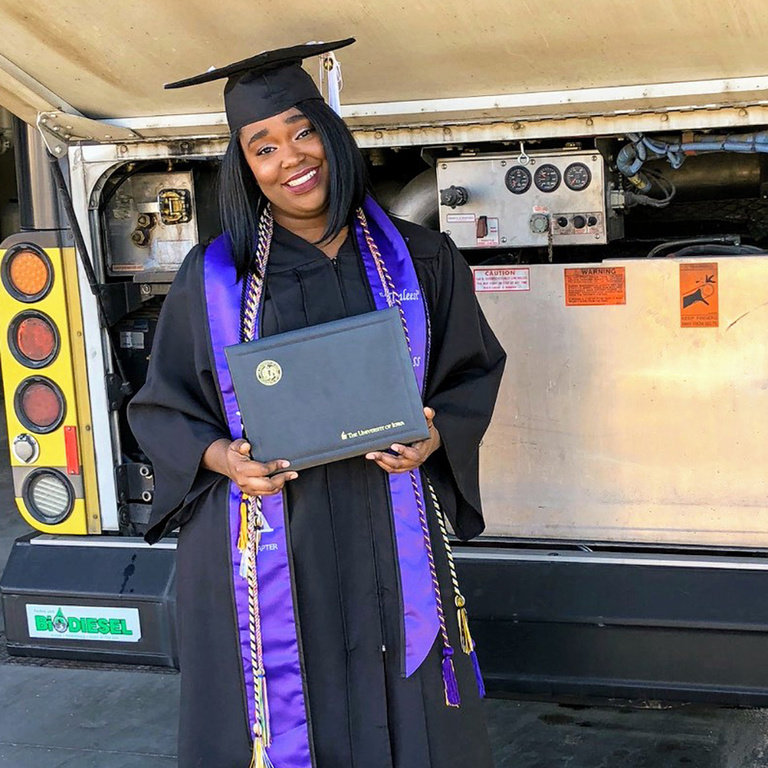 “I strive to always give 100%. I enjoy working and always want to make sure that I go above and beyond. If I see a need at CAMBUS, then I do my best to help where I can,” replied Spradley.

Spradley has been employed with CAMBUS since September 2015 and was promoted to student mechanic in May 2016. Spradley graduated from the University of Iowa in May 2019 majoring in Gender, Women, and Sexuality Studies. " I have made lifelong friends at CAMBUS and would not trade this job for the world.” said Spradley. “I feel honored to be selected as Support Person of The Year. There are not many people of color in support roles at CAMBUS. By winning this award, other drivers of color might be inspired to apply for support positions.”

An award for Driver of the Year has been presented for the past several years. While determining this year’s Driver of the Year, CAMBUS supervisors noted the importance of recognizing a top performer within the support team. The new support person award allows CAMBUS the ability to recognize the vital role that support members play in providing an excellent service to campus. CAMBUS Driver of the Year will be announced in June and is also recognized at the annual Iowa Public Transit Association award dinner.

Support staff positions provide additional support to the operations performing the roles of student mechanics, trainers, dispatchers, assistants, and supervisors. All CAMBUS employees begin as drivers and become eligible for promotion to a support role after 6 months of experience. Support employees play a significant role in CAMBUS operations – from training new drivers, problem-solving issues on the road, and providing maintenance to the CAMBUS fleet.

About 45 student employees work in support positions that provide essential support to the daily operations of CAMBUS. Each year approximately 160 University of Iowa students work together to provide over 3.5 million rides.

CAMBUS is the University of Iowa’s student operated, no fare public transit system that provides fixed-route service throughout campus and demand-response paratransit services for qualifying persons. CAMBUS works in collaboration with other Parking and Transportation Department units to provide and support access and mobility for students, faculty, staff, patients, and visitors. For more information about our services visit https://transportation.uiowa.edu/cambus or call (319) 335-8633.